Reduce Churn Like a Boss for Your Subscription Business

Reducing churn, and thereby retaining customers is a common concern for subscription-based companies. The real growth comes from building long-term relationships with customers. Let's bust that churn once and for all! 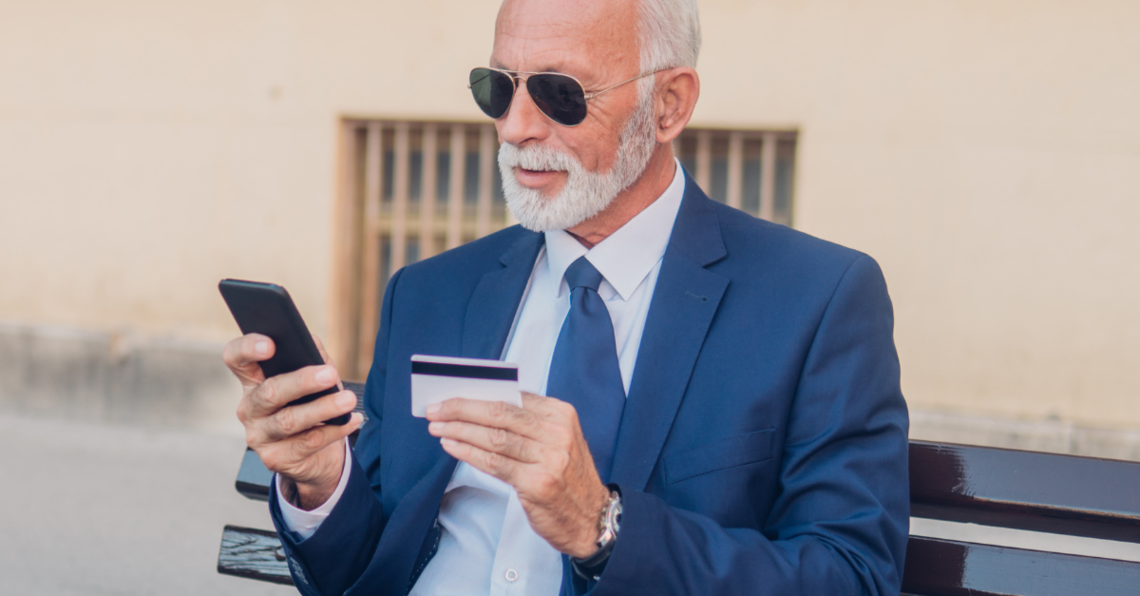 Reducing churn, and thereby retaining customers, is a common concern for subscription-based companies (software and physical products). One and done isn’t the goal here. The real growth comes from building long-term relationships with their customers. And we all know how much cheaper and less time consuming it is to keep an existing customer than it is to acquire a new one. Let’s bust that churn once and for all!

Did you know that 20 to 40% of customer churn is due to involuntary churn? We want to avoid churn wherever possible, but passive churn is arguably the worst kind because the customer didn’t actively unsubscribe to the product; there was simply failure to take payment from the customer. Some examples of this include:

Regardless of the reason, here are a few ways to prevent that frustrating passive churn from happening.

As businesses, one of our goals is to make life easier for our clients or customers. With today’s technology, you don’t even have to rely on your customers to update their card information. Normally, companies would reach out to customers via email to remind them to update their credit card information as the expiry was approaching, a tactic that’s becoming increasingly outdated. In fact, a staggering 85% of customers fail to respond to the run-of-the-mill dunning emails that remind them to update their card details. Auto-updater technology is being offered on many major payment platforms such as Stripe and Braintree, removing the need for customer intervention. While there are fees associated with this feature, it’s well worth paying them to ensure your customers remain customers.

Sometimes simply trying again does the trick; no extra steps needed. It’s important to implement a system that re-attempts charges multiple times after an initial payment failure. Luckily for subscription businesses, a significant portion of failed payments prove successful at the second, third or fourth attempt. Each charge should be spaced out a few days apart to give time for any issues to get resolved (e.g. insufficient funds, temporary security holds etc.)

In cases where the customer’s first method of payment fails, even after multiple attempts, having a second method of payment is an efficient way to avoid any interruptions in service. Show your customers you’re all about flexibility and give them the option of adding a backup card.

Creating automatic and subtle in-app notifications and let your customers know that they need to update their card (e.g. two weeks or a month in advance). This is an unobtrusive way to remind customers about something that many of us forget. 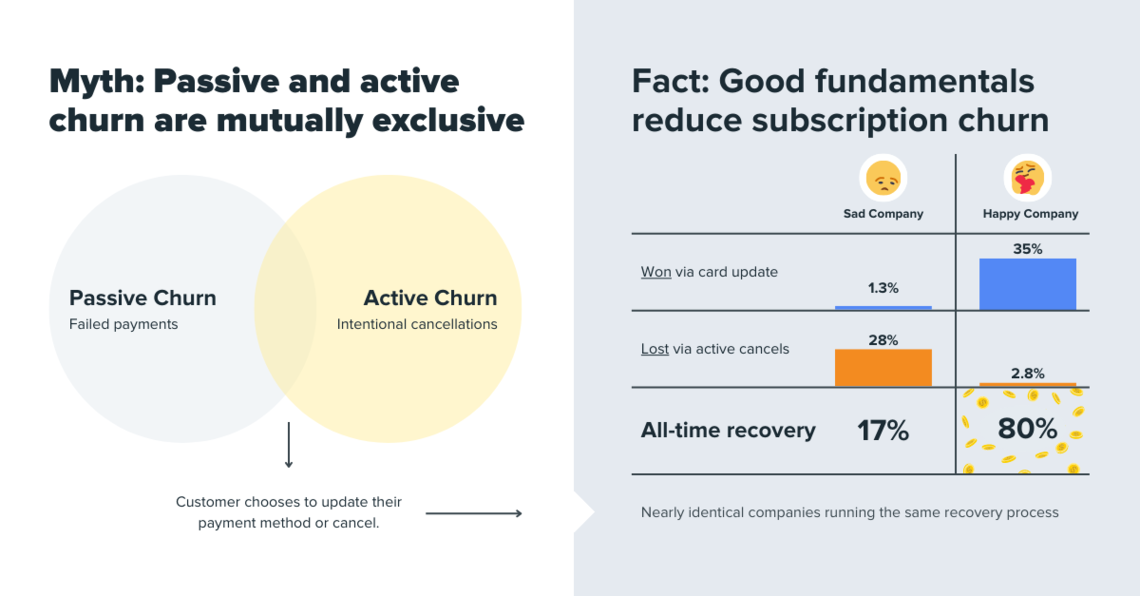 Now that you know how to keep passive churn to a minimum, how do you minimize the number of customers that actively want to unsubscribe to your services? Always be proactive, of course!

Attract the Right Customers in the First Place

This sounds obvious, but sometimes we need reminders of the simple things. There are times when businesses become so focused on getting as many customers as possible that they forget it’s not about just meeting quotas or numbers. It may look great on paper in the short-term, but the effort spent trying to keep a customer that isn’t truly aligned with your offerings could instead be redirected toward attracting the right customers, and keeping them happy for the long-term. It’s difficult to make “misaligned” customers happy no matter how good your product or customer service is because they don’t actually need your offerings.

Help Customers Optimize the Benefits of Your Products

It’s not over once you attract the right customers–you should help each and every one of them maximize the benefits of your offerings. For example, if you’ve noticed that certain customers aren’t using all the features available to them, send a friendly email or text message (you can use a tool like RechargeSMS) about those features, reiterate why it would be beneficial to them and let them know you’re available for any questions they may have.

Offer Incentives to Stick Around

Showing your customers that they’re special and valued can go a long way if done correctly. Your customers will love you for giving them a lil somethin’ extra (and maybe they’ll tell their friends about your business, too).

You don’t need to guess how your customers feel, just ask them! Send them simple email, text or website pop-up surveys to see how you can improve their experience. Maybe they’d like to see a certain feature or have a good idea for improving your website or app. This opens up the door to strengthen your relationship with your customers and make improvements to attract new ones. Just make sure to respond in a timely manner so their comments don’t fall on deaf ears. Using feedback will help you outline future actionable items. 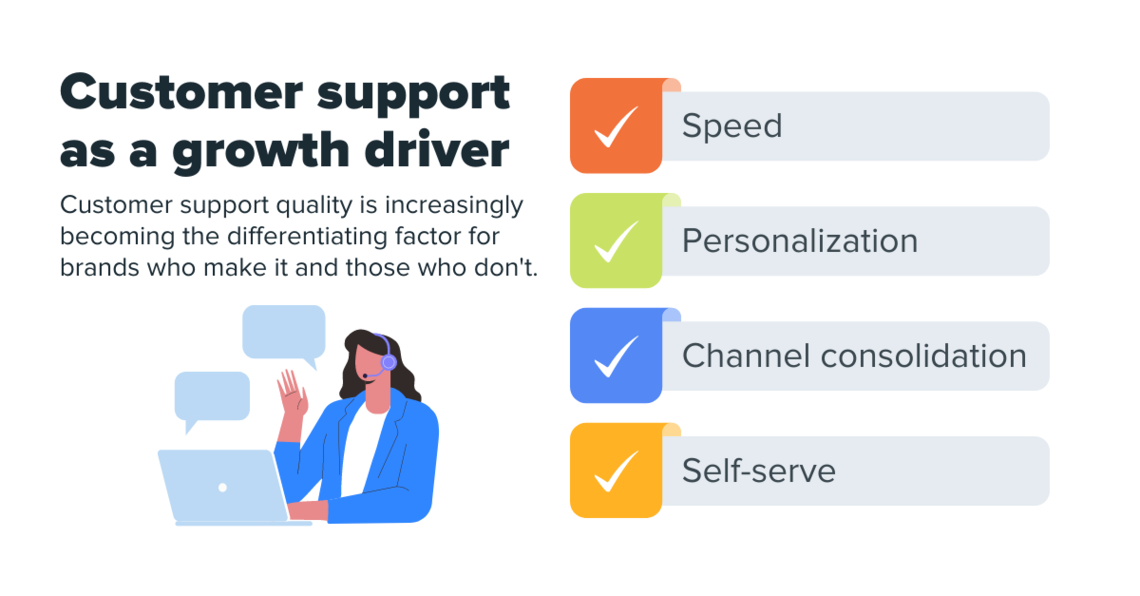 We all know how much of a drag it is to deal with crappy customer service. At best, you roll your eyes and sigh in frustration. At worst, rage bubbles up inside of you and feel like smashing your computer. You want your customers to have a pleasant experience when communicating with staff and solve their problems in a timely manner.

Make sure you do the following:

While minimizing customer churn is a top priority, some customers will eventually leave. It’s an inevitable and expected part of business. We can use these moments as an opportunity for continued growth, learning and success. When a customer cancels, give them the opportunity to tell you why. For example, you can send them a quick one-question survey with options like “Too expensive” or “I don’t need it anymore” and let them add any other comments or suggestions. Only when you identify the main reasons why customers cancel their subscriptions can you take the appropriate actions.

If you’re not sure how to prevent customers from leaving you, dry those tears, our experienced team is here to help you.